As the new year starts the war on social media continues. Many articles and posts attempting to predict which social platform will dominate, or whether social media will even continue to exist and for what purposes.

The popular article claiming that Facebook is “Dead and Buried”. Since teens are now turning to Snapchat, Instagram, and Twitter for ‘Parent Privacy’. Some still lack real security, such as the recent Snapchat DataBase Leak. I still believe Snapchat will continue to grow, but if they choose to be independent, since they did decline Facebook’s offer. They will need to minimize these flaws, and this applies to any company going for the same approach.

That being said the ‘Dead and Buried’ article also stated that Facebook nor the investors should worry. Since these teens will need to resort to Facebook once they enter the real world to keep long-term relationships. Over the last 4 years or so, many companies have tried to match Facebook’s quality of social networking. Google’s executive chairman Eric Schmidt even admitted to ‘My Biggest mistake at Google was not anticipating social’. While Facebook might be the dominant social messaging app, a recent study shows this is only true in the US. 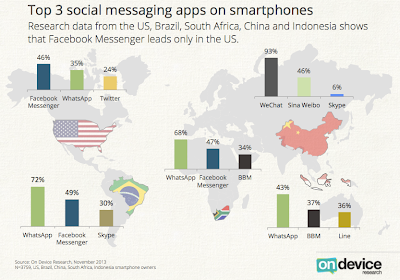 So will Facebook really continue to dominate for long term relationships? And will social media proceed to be the hub for advertising and promoting products? As one digital strategists and author claims:

“Companies will have far more success backing off a bit, being much more thoughtful about what they’re doing online, and making sure to integrate more offline contact and connecting to get back to getting in touch with customers in ‘old fashioned’ ways.” – Aliza Sherman