My first impression on the new Music App (iOS 8.4 update), was that Apple is really trying to push users to get the Music Membership, they do offer a 3 month free subscription. They pushed all of myowned music into a single tab at the bottom, ‘My Music’, although navigating through that tab is not troublesome, it does feel a little cramped. This is especially frustrating since streaming service does not communicate with owned my music in any way. For example if a song is played through the stream which is already on my phone, it should automatically be detected and played instead of burning more data. Speaking of, Apple automatically detects whether you are streaming over Wifi or cellular and selects the appropriate bit rate, streaming on cellular still uses roughly 50Mb/hour. However you can save playlists and/or songs to listen to offline and save some Megabytes. The new music App also attempts to recognize your music taste, to suggest music for you; but again it does not use your owned music for this at all, even though it has all the information it needs. It knows which artists you have, your playlists, song ratings and even the number of times that song was played, yet this information is not used at all for your recommendations. 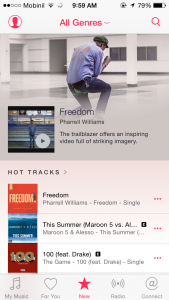 On the bright side, I do like a couple features such as when I select a song to play it does not bring up the player but stays in the playlist or artist folder so I can quickly get ready to select and add the songs to ‘Play Next’. Also, Apple finally decided to bring back the lock screen controls to always appear when music is playing, it would sometimes not be there and would have to bring up the quick settings from below to go to the next track. If there are no improvements by the time my 3 month trial is over, the membership does not seem worthy of $9.99/ month.

Join the discussion and tell us your opinion.

Do you care if I put part of this on my site if I post a link to this site?

Be my pleasure, just please be sure to post a link.
Thank you